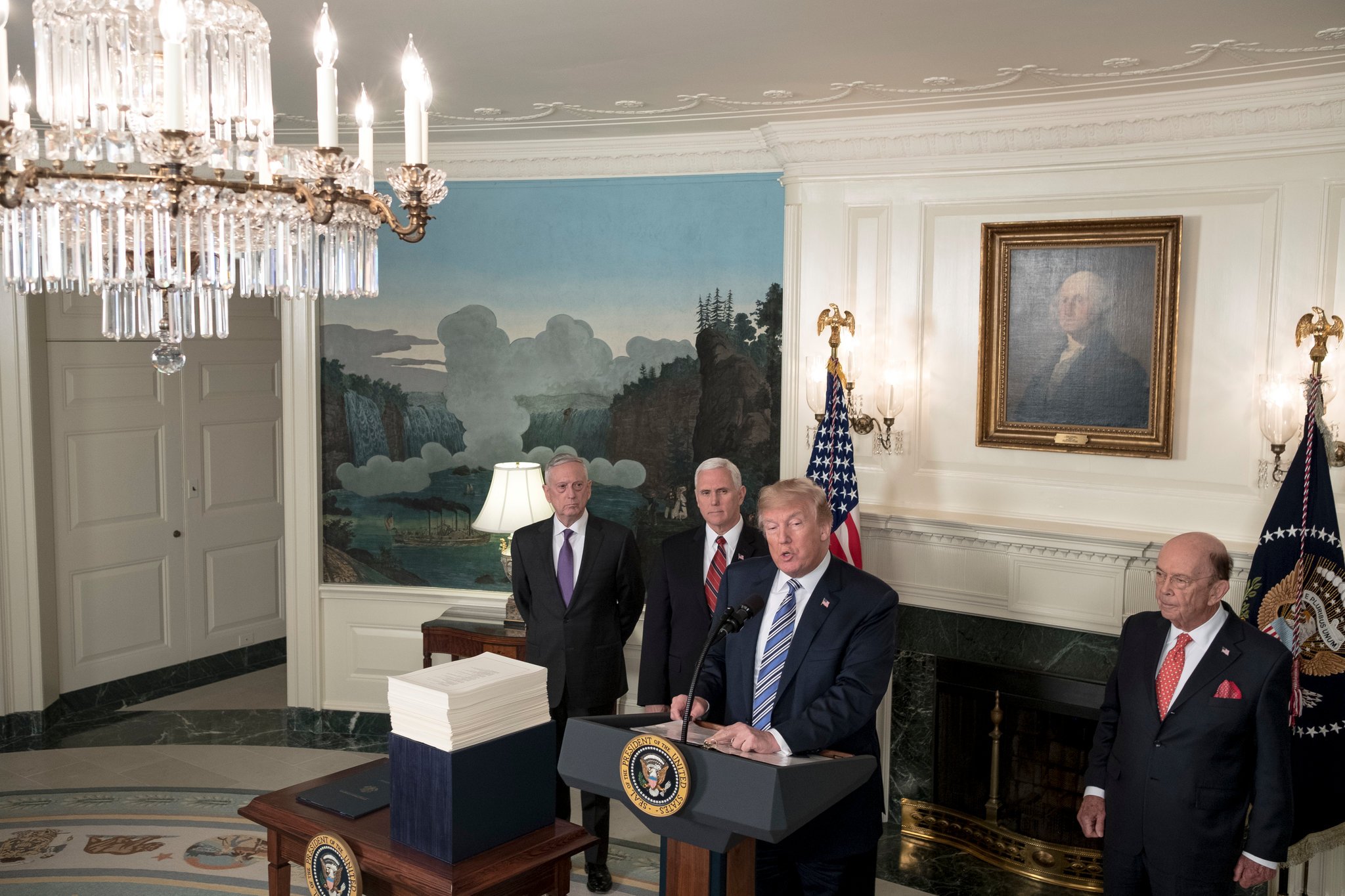 Over the longer term, they must straighten out the strategic incoherence surrounding Mr. Trump’s approach to Russia and China, defining the meaning of the administration’s policy declaration earlier this year that “great power competition — not terrorism — is now the primary focus of U.S. national security.”

Washington is now consumed by a debate over whether Mr. Trump’s new team plans to govern as far to the right as it talks.

So far, the incoming national security adviser, John R. Bolton, has declared that his past comments are “behind me.” Hours after his selection was announced, Mr. Bolton vowed that he would find ways to execute the policies that Mr. Trump was elected on, but that he would not tolerate slow-walking and leaks from bureaucrats he dismissed as “munchkins.”

Some who know Mr. Bolton and his operating style predict titanic clashes.

Defense Secretary Jim Mattis, the retired general who has argued for keeping the Iran deal intact and warned that military confrontation with North Korea would result in “the worst kind of fighting in most people’s lifetimes,” told colleagues on Friday that he did not know if he could work with Mr. Bolton. The White House chief of staff, John F. Kelly, another retired four-star general, was also unenthusiastic about Mr. Bolton’s hiring.

Mr. Bolton’s harshest critics — mostly Democrats, but their ranks include some members of the Bush administration — argue that the odds of taking military action will rise dramatically when he becomes the last person a volatile American president consults.

“John Bolton is not some gray bureaucrat whose views are unknown to us,” said Michael McFaul, the American ambassador to Moscow under President Barack Obama, and now a Stanford professor and the director of the Freeman Spogli Institute for International Studies.

“He’s very clear that there should be regime change in Iran and North Korea, and military force should be used to achieve those goals,” Mr. McFaul said. “If you hire him, you’re making a clear signal that’s what you want.”

But others who have worked for years with Mr. Bolton argue that Mr. Trump knows exactly what he is getting: leverage, not conflict.

“I think this notion everybody talks about, that the risks of war have gone up, is wrong,” said Stephen J. Hadley, who was Mr. Bush’s national security adviser and a major architect of the invasions of Afghanistan in 2001 and Iraq in 2003. “This is the peace-through-strength crowd who want to make clear to people that they’re tough and that no one should cross them. But the reason for that is to deter war.”

Dov Zakheim, a former senior Defense Department official who has known Mr. Bolton for 35 years, wrote on Friday that Mr. Bolton “may be a fire breather, but he is a man who cares deeply about his country,” in comparison to his boss, who “cares deeply about Donald Trump.”

Whatever Mr. Trump’s motives, his selection of this team would have been hard to imagine when he first came to office declaring that the continued American presence in Iraq was a “disaster,” that he was comfortable with Japan and South Korea getting their own nuclear weapons so the United States would not have to defend them, and that America would no longer be the world’s policeman.

Mr. Bolton has come to the opposite conclusion.

He not only fervently advocated the attack on Saddam Hussein from his post at the State Department during the Bush administration, but he also defended its aftermath, and has said he remains convinced it was the right decision. Over the past three years, Mr. Bolton has advocated bombing Iran, attacking North Korea, and carving a new state out of Iraq and Syria.

Mike Pompeo, the nominee for secretary of state, said at the Aspen Security Conference in July that the most dangerous thing about North Korea was the fact that its young, moody and reportedly ruthless leader, Kim Jong-un, controls its weapons.

“So from the administration’s perspective, the most important thing we can do is separate those two. Right?” said Mr. Pompeo, who at the time was months into his current job as C.I.A. director. “Separate capacity and someone who might well have intent, and break those two apart.”

Assuming that Mr. Pompeo is confirmed, he and Mr. Bolton, the two most forceful, aggressive new members of the policy team, will have to decide in what order they can risk those confrontations. The Trump administration has said it is open to direct talks with Mr. Kim by May — the same month by which the president has said he will scrap the Iran nuclear accord.

“Even if you are going to be a superhawk, you can’t do all these at once,” said Rolf Mowatt-Larssen, a former C.I.A. station chief in Moscow who later hunted down Pakistani nuclear technology as the Energy Department’s chief intelligence officer. “And if you want to go to war with Iran and North Korea, you have to expect to alienate your allies and run headlong into the Russians.”

William J. Burns, a longtime American diplomat who was Mr. Bush’s ambassador to Russia and Mr. Obama’s deputy secretary of state, predicted that if the new team exits the Iran deal and confronts North Korea, the first beneficiary is likely to be President Vladimir V. Putin of Russia.

“He looks for splits,” Mr. Burns said of Mr. Putin. “He knows he will benefit if we walk away from the Iran deal, because it will put a wedge between us and our European allies.”

On North Korea, Mr. Burns said, Mr. Putin is seeking “splits between the U.S. and China. We are doing his work for him.”

In fact, it is in dealing with Mr. Putin that the new team is likely to run headlong into Mr. Trump’s reluctance to ever say a critical word about the Russian president. As C.I.A. chief, Mr. Pompeo has embraced the intelligence community’s conclusion that Russia meddled in the election, though he changes the subject quickly when asked about it.

Mr. Bolton, by contrast, has ranked among Mr. Putin’s harshest critics. Last July, days after Mr. Trump met Mr. Putin for the first time at a summit meeting in Germany, Mr. Bolton wrote that the Russian interference in the 2016 election was “a casus belli, a true act of war, and one Washington will never tolerate.”

Mr. Trump did not view it that way.

He emerged from the meeting in Germany repeating Mr. Putin’s observation that the Russians were too skilled at cyberoperations to be caught if involved. Last week, Mr. Trump called Mr. Putin to congratulate him on winning a Russian election widely viewed as a sham, making no mention of the recent nerve-agent attack that Britain concluded, with American agreement, was a covert action by Moscow.

If it was, it was being planned out as Mr. Pompeo was acting as the host to the directors of the three major Russian intelligence services in Washington earlier this month.

The unknown factor in the new mix is Gina Haspel, the career intelligence officer who has been nominated to be the first woman to run the C.I.A. Since she has spent much of her career undercover — details of which the agency is just beginning to release, in an effort to lobby for her confirmation — her foreign policy views are largely unknown.

But her record in the terrorist detentions and interrogations following 9/11 is well documented. Senator John McCain, the Arizona Republican who was tortured as a prisoner of war, this past week pointedly asked in a letter to Ms. Haspel, “Do you believe actions like these were justified, and do you believe they produced actionable intelligence?”

At a moment when Mr. Trump has sided with the economic nationalists in his administration and ordered the imposition of tariffs on China to counter its restrictions on American companies and the forced transfer of American intellectual property, Mr. Bolton has gone one further.

He has questioned whether the United States should abandon the “One China” policy that has been the underpinning of relations since the two countries resumed diplomatic relations.

In 2016, Mr. Bolton wrote that confronting China “may involve modifying or even jettisoning the ambiguous ‘One China’ mantra, along with even more far-reaching initiatives to counter Beijing’s rapidly accelerating political and military aggressiveness in the South and East China Seas.”

It is unclear how that squares with Mr. Trump’s campaign argument that the United States should pull its forces back from Asia unless South Korea and Japan pay more of the cost of keeping them there.

But the most immediate decision facing the new team will be the benefits and costs of exiting the Iran deal. Mr. Trump cited his differences with Rex W. Tillerson on Iran in firing the secretary of state.

Mr. Bolton and Mr. Pompeo have been among the harshest critics of the nuclear accord, but they have not said how they would manage the international backlash if Mr. Trump decides, by a May 12 legislative deadline, to resume the sanctions that the United States suspended when the deal was reached.

If Washington breaches the deal, Iran may declare it is now free to resume producing nuclear fuel in unlimited quantities — limits it agreed to, for 15 years, in return for economic normalization. If so, that could put the United States and Israel back where they were in the years before the accord was reached: threatening military action to destroy Iran’s facilities, even at the risk of another Middle East war. That was the path Mr. Bolton advocated.

In August, when Mr. Tillerson and Mr. Mattis wrote a joint op-ed article in The Wall Street Journal describing the merits of building economic pressure on North Korea in a policy of “strategic accountability,” Mr. Bolton said he was “appalled.”

“Time is not a neutral factor here,” he said on Fox News, where he was a contributor. “More negotiation with North Korea? I think they’d say ‘bring it on.’ More time to increase the size and scope of their ballistic missile and nuclear capabilities.” He will now be preparing Mr. Trump for that negotiation.