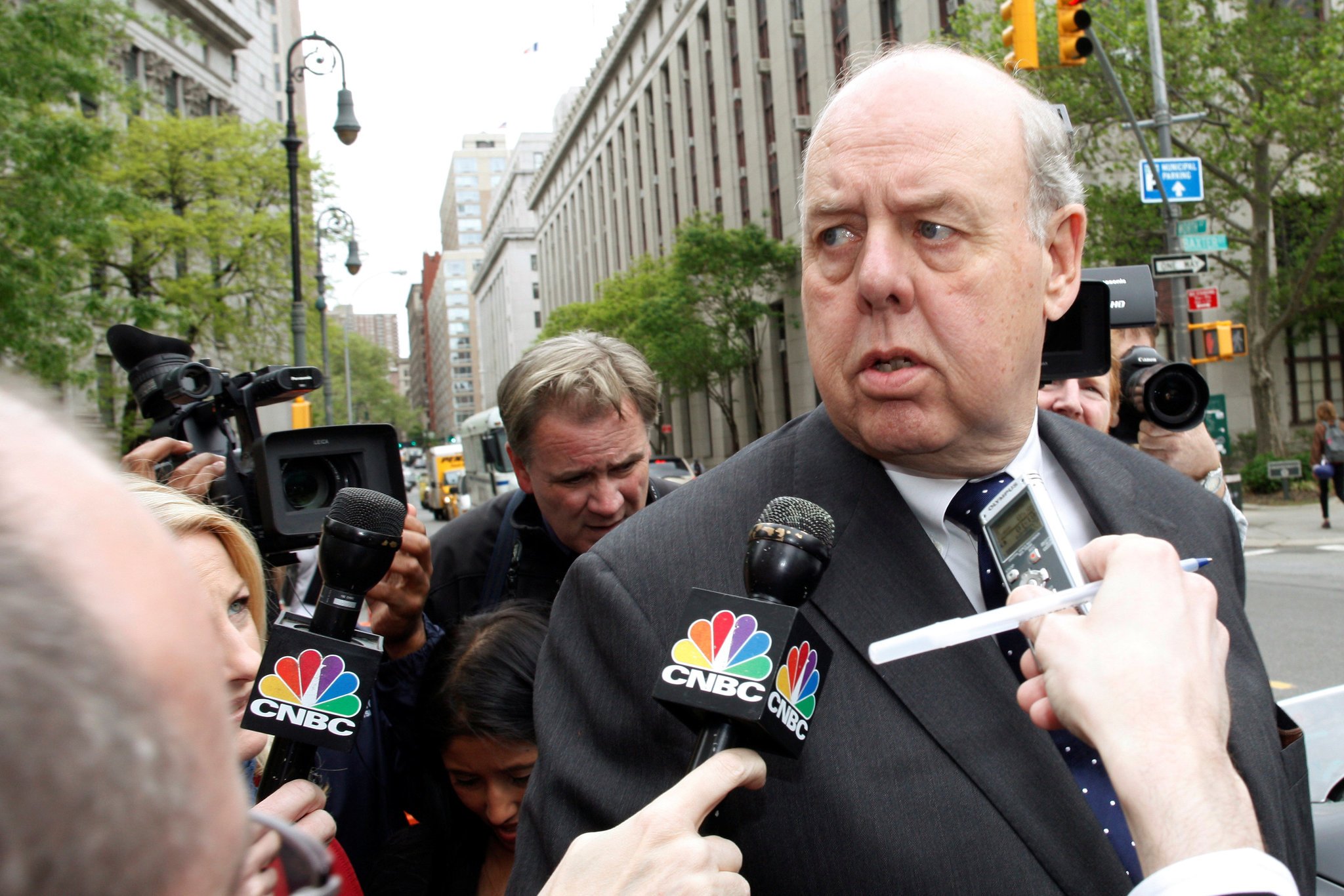 That lawyer, Jay Sekulow, is a conservative commentator who made his name on religious freedom cases. Mr. Sekulow is in talks with other lawyers about joining the team, although it is not clear how far those discussions have progressed.

Hours before the announcement of Mr. diGenova’s departure, which Mr. Sekulow said was related to a conflict of interest, the president took to Twitter to reject any suggestion that lawyers do not want to work for him.

“Many lawyers and top law firms want to represent me in the Russia case … don’t believe the Fake News narrative that it is hard to find a lawyer who wants to take this on,” he wrote. “Fame & fortune will NEVER be turned down by a lawyer, though some are conflicted.”

Adding new lawyers, he said, would be costly because they would take months “to get up to speed (if for no other reason than they can bill more).”

“I am very happy with my existing team,” he added.

This month, the president met with the veteran lawyer Emmet Flood about the possibility of joining the legal team. But Mr. Trump was put off by the fact that Mr. Flood, a Republican, had represented Bill Clinton during his impeachment process, and Mr. Flood has made clear that he will not represent the president if Marc E. Kasowitz, his brash longtime personal lawyer, has any role in the effort.

Mr. Trump also tried to recruit Theodore B. Olson, a well-known Republican lawyer, but Mr. Olson has said he would not be representing the president.

The first phase of legal work for Mr. Trump in the inquiry by the special counsel, Robert S. Mueller III, was led by a White House lawyer, Ty Cobb. That work, which in part involved the production of documents and the arrangement of interviews with White House officials, has been largely completed.

The second phase, which is now focused on the question of a presidential interview with Mr. Mueller, had been led by Mr. Dowd. One reason Mr. Dowd quit was that, against his advice, Mr. Trump was insistent that he wanted to answer questions under oath from Mr. Mueller, believing that it would help clear him.

Mr. Dowd had concluded that there was no upside and that the president, who often does not tell the truth, could increase his legal exposure if his answers were not accurate.

Roger Cossack, a seasoned legal analyst, said the key to successfully defending a high-profile client under immense scrutiny was to have a cohesive legal team with a consistent strategy.

“In these types of cases, you need highly competent lawyers and a client who will listen and follow their advice,” Mr. Cossack said. “If you don’t have both, you have what we’re seeing here: chaos and disaster.”

“You have a client who clearly thinks he has a better idea of how things should work than the lawyers who, from time to time, have told him things he doesn’t want to hear,” he added. “He is looking for the guy who can say, ‘I know how to handle Mueller, I know you think he is bad, and we’ll take care of it.’ Problem is you can’t find that lawyer because no one will be able to do that.”

People close to the president say the upheaval in the legal team was inevitable. When Mr. Kasowitz took the lead after Mr. Mueller was appointed in May, he wanted to follow a model used by Mr. Clinton, with a separate team of lawyers and communications professionals handling issues related to the inquiry, so that the White House staff could keep its distance.

But Mr. Trump, who trusts few people and considers himself his best lawyer, spokesman and strategist, never wanted that type of system. As a result, his legal and public relations strategies have been out of sync, with the president at times publicly contradicting his lawyers, and the White House often finding itself flat-footed in the face of new disclosures about the Russia investigation.

The president’s decision has also exposed many of his aides, leaving them deeply enmeshed in an inquiry that is likely to cost them tens of thousands of dollars in legal fees.

But while Mr. Trump has struggled to find lawyers, his family and his close associates are being represented by some of the country’s top legal talent.

His son-in-law, Jared Kushner, has hired Abbe Lowell, a longtime Washington lawyer who recently got the Justice Department to drop corruption charges against Senator Robert Menendez, Democrat of New Jersey, after a lengthy court fight.

Three prominent current and former White House officials — the former chief strategist, Stephen K. Bannon; the former chief of staff, Reince Priebus; and the White House counsel, Donald F. McGahn — are being represented by William A. Burck, who turned down the chance to represent the president. Mr. Burck, a former federal prosecutor, represented FIFA in its legal problems in the United States and has worked for high-profile witnesses in federal investigations, including Maureen McDonnell, the wife of a former Virginia governor.

The turmoil in Mr. Trump’s legal team started within weeks of the appointment of Mr. Mueller. Mr. Kasowitz pushed for an adversarial approach to the special counsel, which the president was poised to follow. But Mr. Kasowitz clashed with Mr. Kushner, and he was soon pushed aside after a series of missteps and embarrassing incidents.

The president then hired Mr. Cobb, a veteran Washington lawyer, to lead efforts within the White House, as well as Mr. Dowd, who was put in charge of his personal legal team. They advocated a strategy of cooperation, telling the president that the sooner he gave Mr. Mueller’s office what it wanted, the sooner his name would be cleared.

While Mr. Cobb had told the president that the investigation would be over by now, it seems to be accelerating. Mr. Mueller is still looking into a wide range of matters related to Mr. Trump’s corporate activities, his 2016 campaign, his associates and his time in office.

Mr. Trump, hoping to bolster his team, met with Mr. diGenova and Ms. Toensing in recent days but, according to two people told of details about the meeting, did not believe he had personal chemistry with them.

There were also significant conflict-of-interest issues, but Mr. Trump could have waived them if he wanted. Ms. Toensing is representing Mark Corallo, who was the spokesman for Mr. Trump’s legal team in 2017 before they parted ways. Mr. Corallo has told investigators that he was concerned that a close aide to Mr. Trump, Hope Hicks, may have been planning to obstruct justice during the drafting of a statement about a meeting between a Russian lawyer and Donald Trump Jr. during the campaign.

Ms. Hicks’s lawyer has strongly denied that suggestion, and White House aides said Mr. Corallo’s assertion had come up in discussions with the president as he weighed whether to go ahead with Mr. diGenova and Ms. Toensing.

Mr. diGenova had been expected to serve as an outspoken voice for the president as Mr. Trump has increased his attacks on Mr. Mueller. Mr. diGenova has endorsed the notion that a secretive group of F.B.I. agents concocted the Russia investigation as a way to keep Mr. Trump from becoming president, a theory with little supporting evidence.

“There was a brazen plot to illegally exonerate Hillary Clinton and, if she didn’t win the election, to then frame Donald Trump with a falsely created crime,” he had told Fox News in January.